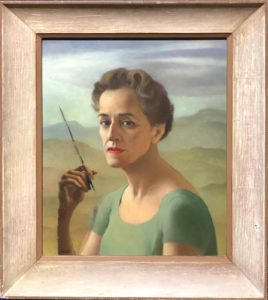 In the March edition of the Los Angeles County Museum of Art on Fire, author William Poundstone wrote, “One of this season’s sleepers is Something Revealed: California Women Artists Emerge, 1860-1960.” In the article he drew special attention to rediscovered life and career of the painter Ruth Miller Kempster.

Ruth Miller Kempster was one of 150 California female artists featured on exhibit at the Pasadena Museum of History’s show, “Something Revealed: California Women Artists Emerge, 1860-1960.”

As Poundstone states in his article, “The biggest find may be Ruth Blanchard Miller Kempster (1904-78), an inventive painter and muralist who worked in a Magic Realist mode. In her unfinished 1950 self-portrait, Kempster  casts a withering side-eye at this man’s, man’s, man’s world. She holds her paintbrush like Cruella de Ville would.”

It is an insightful and informative article that you can read here: LACMA article on Ruth Miller Kempster