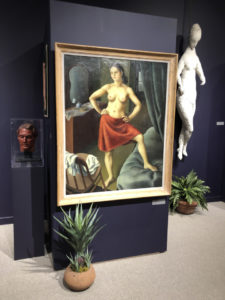 The online art magazine, Hyperallergic, chose the “Something Revealed: California Women Artists Emerge” exhibit as number 4 of their BEST OF 2019 art exhibits in Los Angeles.

Our exhibit was put on at the Pasadena Museum of History, it was a two-part exhibition that displayed around 350 artworks. They were created by 150 female artists who lived and worked in California between 1860 and 1960–many of whom that were relatively unknown or overshadowed by male artist of the time.

Hyperallergic’s Elisa Wouk stated, “Most of the artists are lesser known, having been obscured by their male counterparts and receiving less institutional support. The display was delightfully eclectic, ranging from self-portraiture to Walt Disney animations.”

Here is a link to the article: Hyperallergic Top 20 Los Angeles Art Exhibits of 2019