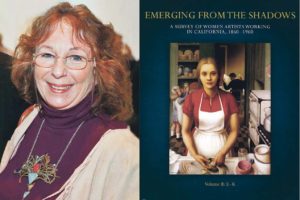 In her work as an art conservator – someone who uses art, history and science to investigate, restore and preserve art – Maurine St. Gaudens saw a lot of paintings from clients. Many of the works lacked biographical information, so their origins were a mystery. Gaudens kept a record.

“I began to realize that they were women artists,” she says. “I got more and more of them. They were very good.”

That suggested that there were caches of very good California women artists who, in time, had been forgotten or overlooked. The paintings charged her with a mission: to remedy the neglect.

Her seven-year effort culminates in the four-volume Emerging from the Shadows: A Survey of Women Artists Working in California, 1860-1960. It’s an excellent compendium of women artists’ works and bios, put together by Gaudens and collaborator Joseph Morsman, who came on more than three years ago to help.

Each book is 300-plus pages, containing a combined 2,000 full-color images. The work it took to compile the biographical information and get images of artwork was considerable.

“We had to dig deep and hard,” Gaudens says.

They often started with just a name. They searched newspaper clippings, artist associations, birth and marriage certificates, exhibition programs. They would start online, then venture into the real world of repositories, cemeteries, homes and libraries. They wanted to create a reliable record, especially for curators, collectors and academics to build upon.

They found misinformation; where they could, they corrected it. They found forgeries; that’s where Gaudens’ trained eye could parse inconsistencies. Name changes by marriage would throw them off the forensic trail. They would try to locate family members and descendants to fill in the blanks.

“We did detective work,” she says.

Morsman seconds her notion: “For every name we discovered, there were dozens we didn’t include because we didn’t have the image.”

They could have kept going, but at 323 artists – from painting to illustration to printmaking, from plein air to realism to abstract expressionism – they had to pull the plug. They identify about 50 artists as being “well known” in California art circles. The rest are unknown. They believe there are thousands more who’ve been forgotten. One such artist founded a Santa Cruz art association, which still exists. But that association doesn’t even have a record of her.

“When you look at Monterey, Carmel and Santa Cruz, we have a list of artists we couldn’t find biographical data on. They’ve dropped off the face of the earth,” Morsman says.

She taught at Monterey Union High School from the 1930s to the ’60s, so they figure she must have, through teaching art, influenced a huge number of students’ creative direction.

These were noted, award-winning artists. The duo think there are basements and attics full of their works, with owners unaware of what they’ve got.

Asked why these works went uncounted for, Gaudens doesn’t hesitate.

“They were discriminated against,” she says. “The male population was their biggest hurdle. And unless they did still lifes, children or little animals, they were not allowed to exhibit. When they did do a powerful subject, they were accused of copying males and not being creative.”

Eric and Teresa Del Piero of Carmel loaned paintings by the Bruton sisters and Emmy Lou Packard from their collection to be photographed for the book.

“Women artists signed paintings with masculine [abbreviations of their] names,” Teresa says. “E. Charlton Fortune, M. DeNeale Morgan. It made it easier to sell if it sounded like a man painted it.”

This historical inequality is not a new story, but Gaudens suggests it’s tempered by the discovery that in their time, these women lived fully, bravely and lengthily.

“They lived forever,” she says. Relatively speaking. Harpe lived until 86, McQuaid until 87. The average was 81.5.

In researching their lives, they found that these women were independent, free-spirited and almost exclusively white. They traveled a lot and formed bonds over art, revelry, relationships and marriages. Not many had children, but when they did they kept doing art instead of abandoning it.

“These women were doing what they loved,” Gaudens says.

Locally, the duo got help from the city of Carmel, Trotter Gallery and Monterey Museum of Art. They hope that related art exhibits can be mounted of these women’s artwork, and envision more life to the project they’ve jump-started.

“Our hope is art students will continue this work,” Gaudens says.

More women are waiting to emerge.

EMERGING FROM THE SHADOWS is available at Monterey Museum of Art-Pacific, 559 Pacific St., Monterey. 372-5477. Also at www.emergingfromtheshadows.com